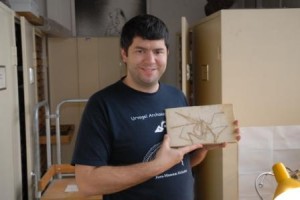 With the Pterodactylus holotype in Munich

There are several broad themes to my research, though I have worked on a wide range of topics and contributed to a number of different areas of palaeontological and biological research. My work focuses on the (non-avian) dinosaurs as a whole and especially the carnivorous theropods, and also on the flying pterosaurs. However, I have also published on birds, and more basal archosaurs and archosauromorphs in the past. I often use a wide range of extant analogues in my research and thus also look at extant mammals, birds and reptiles as part of my work.

Posing with a cast of a crouching Tyrannosaurus in Tokyo

My research is aimed at answering key questions about these animals and in particular what this means for how they lived their lives in terms of their behaviour and ecology. How did they hunt and feed, how might they have communicated, was there social structure within herds, how large did they get and what did this mean for their biology? These questions have led to my publishing on a series of papers on the evolution of large body size, socio-sexual signalling, sexual selection, feeding traces and bite marks, stomach contents, and the evolution of anatomical adaptations linked to these issues. 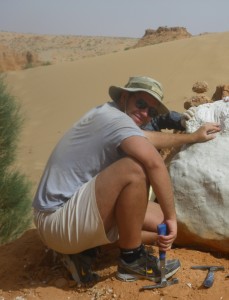 With a large field jacket in the Gobi desert, China

Although not a key focus of my work, I have also named a number of new genera and species of dinosaurs, pterosaurs and other extinct animals and I continue to describe specimens of both bones and fossil footprints. I have a particular interest in ‘lost’ pterosaur specimens from the Jurassic Solnhofen of Germany – those held in museum collections but never described, and make an effort to locate and describe them.

I am currently involved with a number of major field projects and excavations, most notably in China. I have taken part in fieldwork in the famous Bayan Mandahu region of Inner Mongolia, and have spent several weeks working in Henan, and time in the quarries in Liaoning and the massive new dinosaur quarries in Zucheng, Shandong province (home of Zhuchengtyrannus). I was involved with the ongoing fieldwork at the ‘dinosaur death pits’ of Xinjiang province and will continue this for the next few years. I’m have also carried out fieldwork in the UK, Mexico, Peru, Germany and Canada.

Logo for the crowdsourced Project Daspletosaurus work from 2013. Logo courtesy of David Orr.

My outreach efforts have always allowed me to communicate with the public about my research, but recently I have also got more directly involved by having some of my work funded through crowdsourcing via Microryza. This allows me more direct interactions and communication about research projects from their inception, through to completion, and for the public to become more involved and directly support science.