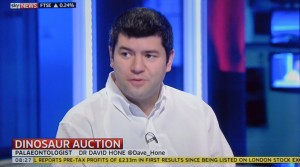 I am available for consultation on palaeontology, dinosaurs, zoology and other subjects. This includes media appearances, providing research or feedback on materials, and writing material for the public or reviews.

Since 2012 I have written regularly for The Guardian with the “Lost Worlds” and have also penned articles for National Geographic, the Sunday Telegraph, Huffington Post, and the BBC Walking with Dinosaurs website. I have appeared on various BBC channels, Channel 4 and Sky News in the UK, RTE in Ireland, CCTV in China, TRT World, and the Discovery Channel in North America and have also made numerous appearances on radio shows in the UK and Ireland, especially BBC Radio 5 Live and NewsTalk among others. In recent years I have contributed to a number of podcasts as a guest including Palaeocast, Science…Sort of and Enlightenment and videocasts for FacultiMedia and others. 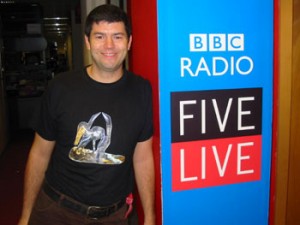 At BBC centre for one of many appearances on Radio 5Live

I am regularly used as a consultant by various media groups and have acted as a scientific consultant for various documentaries including the BBC’s ‘The real T. rex with Chris Packham’, National Geographic ‘T.rex Autopsy’ and David Attenborough’s ‘Conquest of the Skies’.  I’ve also contributed to radio productions as well as online and print articles, books and artistic works and exhibitions for museums in the UK, Canada, Japan, Korea and China.

My research has been covered by numerous national and international media outlets including the BBC, New Scientist, Nature, National Geographic, The Times of London, The Independent, Science Daily,  Fox News, MSNBC, Live Science and others.